LAUREL AND HARDY: SCRAPS ACROSS THE AGES 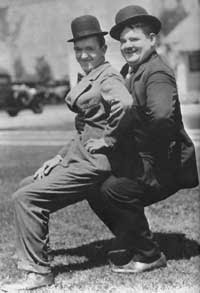 One of the tenets of this weblog, since it’s immortal inception last summer, was to find various things of interest that were popping up on youtube and link them–historically, anecdotally–giving some shape to the wonderful montage of archival material available now on the web. Oftentimes this is relatively easy: pick a topic (an actor, a director, a movie) and go! Other times I find myself collecting clips and stringing together ever more peculiar scenarios (a few months ago I started posting clips of the movie “Stormy Weather” while also using back-up clips of Bill Robinson from other movies to mount a whole new scenario, which involved nothing less than a total re-write of SW which would, in my humble estimation, have turned that valueble but–let’s face it–B-minus musical into a Freed-Unit style classic of the genre. Oddly, the earth didn’t exactly move after all my troubles).

What am I saying? That today (and in the past on occasion) I have failed in my mission to find a clear thematic strategy for this posting, but nonetheless I have found two fabulous pieces of film that simply need to be shared. That both feature Stan Laurel should be reason enough to have not bothered with the lengthy apologia. Nonetheless, they remain two scraps–one is an excerpt of one of Laurel and Hardy’s greatest two-reelers and the other is silent footage of Stan Laurel in his apartment, in 1961. Both gave me great pleasure upon finding them the other day. So screw the tenets of this weblog. Here they are.

First is the almost final almost five mintues of “Helpmates”, a 1931 two-reeler that is startlingly Beckettian in that it is more or less a two-man movie with as little words as possible (two bit parts prevent it from being a perfect game, but it remains almost entirely a film in the lone hands of the boys). I would have gladly posted the whole film had anyone been game enough to have provided it but, alas, it appears not to have yet made it to youtube. These things change everyday, though, so who knows what tomorrow may bring? I’m sure “Helpmates” is available on video/dvd somewhere and it truly must be seen in its entirety to be appreciated–it represents L&H at the peak of their inventiveness, timing, and cinematic control over their own images and how to perfectly...diddle I suppose is the correct word…the audience with expectations and results.

These five minutes need little set-up but I’ll give it anyway: the movie begins with the information that Oliver’s wife went out of town for the week. Then the first image we see is of utter destruction–a house that has clearly been the scene of a bacchanal unprecedented in today’s “I have to get up early and go to the gym” culture. (This is instantly funny for the simple reason that it’s impossible to imagine L&H partying up this much of a storm; who did they invite? Were the girls pretty? How did they acquire the bootleg hooch?) The misson is to clean the house up before Oliver’s wife arrives on the afternoon train. Every frame of this film is a gem–but these particular five minutes, which come toward the end, exemplify the masochism and destruction that Laurel can inflict upon Hardy without, of course, meaning to. What’s interesting to me as well is the extent to which Hardy carries much of the humor. As a child I always thought of him as the straight one and Laurel as the funny one. But as one enters adulthood (or, in my case, slogs through middle-age) Hardy’s predicaments and frustrations are the funnier and more recognizable; Laurel is there to screw things up and Hardy, the “provider”, the “daddy”, is the one who has to recover his dignity at all costs. Watch too the editing of this section–by now the Hal Roach studio was out of the caveman era of the early talkie (even though this is only 1931) and many of the gags are finally happening a beat ahead of the audience.

The second post–Stan Laurel at home–is a lovely look at what became of Laurel…after Hardy. He and his fifth (sixth? seventh?) wife moved to a modest apartment across from the Pacific Ocean in Santa Monica. The building, called the Oceana, is still there–it has since shed it’s 1950’s suburban orgins and grown into a hip and groovy beach-adjacent fashion hotel. There Stan lived a quiet and dignified later life. He was listed in the phone book and was apparently receptive to meeting and greeting whoever had the courage to call him up and ask for an audience; his earlier life having been filled with conflict–drink, divorce, personal tragedy, professional accomplishments and crises–these years must have come as something of a relief to Stan. As you’ll see he’s dapper and well turned out…he shows off his special Oscar (which he didn’t pick up in person)…and he even mugs and does some old-time Stan-isms for the camera. He’s past seventy here and would only live another few years. Many comedians–among them Jerry Lewis and Dick Van Dyke–came regularly to pay homage to the master and by all accounts Laurel’s later years, while not financially lavish one’s, were as content as a comic’s–or anyone’s–late years can be.

And that reminds me of a wonderful film called “The Comic” starring Dick Van Dyke as a Harry Langdon/Buster Keaton silent era star. It was directed by Carl Reiner, made in the late sixties, and ends with an unforgettable scene of “Billy Bright” (the Van Dyke character), aged and alone in a small apartment, setting his alarm clock for five am, when a TV station has scheduled a showing of one of his short silent comedies….and getting up, making himself an egg, and watching a scrap of his past flash across the ages over the airwaves…but alas that’s not on youtube either, yet. And so we wait…