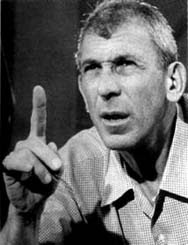 The year is 1982. I’m a pisher of eighteen or so, intensely interested in and committed to filmmaking, film history, filmmakers etc. And one of the last of the old Hollywood characters to still be at it this late in the game is Dick Brooks (see previous post)–though I hesitate to think of him as “old Hollywood”. The truth is, his best films were made later in his career and hardly feel like the work of a writer/director bred in the B unit at RKO and MGM (which he was, more or less). But Brooks always defied easy characterization–although he started writing for movies before World War 2, his breakthrough work wasn’t a screenplay but instead a novel called “The Brick Foxhole” which was filmed as “Crossfire” in 1947. Even then, Brooks had a flair for the outrageous and lethally incorrect; the plot of “The Brick Foxhole” revolved around a group of war veterans who murder a homosexual. Forget the gay angle–daring enough in its day. The fact that he wrote about the revered returning vets in terms less than holy was the real news. (Indeed the movie version substituted anti-semitism as the motive for the killing and was just as controversial). Brooks claimed to have been court-martialed for writing the novel. Maybe he was. Like I said in the previous post, he was a great anecdotalist.

Anyway back to 1982. Brooks penultimate film, “Wrong Is Right” starring Sean Connery hadn’t gone into general release yet but was being screened at Arthur Knight’s USC Thursday evening class, where Knight would usually show a new film and interview the director. (The class was known among students as “Thursday Knight at the Movies”). Because of a personal friendship between Arthur and my father–and myself for that matter–Arthur invited me to attend the class. The word on “Wrong Is Right” was that it was a mixture of “Network” and “Dr. Strangelove” and supposedly as good or better than either. Alas that wasn’t the case–though I haven’t seen the film in a long time and wouldn’t be surprised if it looks quite a bit better now than it did then. According to some IMDB posts, the film accurately predicts the rise and domination of the 24 Hour news cycle. Certainly Brooks wasn’t looking backward for inspiration–he was then in his early seventies and deeply engaged in and concerned with the world as it was now…in other words, he was an artist who saw his job as a filmmaker to depict the difficult and often unpleasant truths in the world he was living in (for his best stab at this, see two great movies that he wrote/produced/directed and rather single-handedly and single-mindedly forced into the American consciousness: “In Cold Blood” and “Looking For Mr. Goodbar”–though both were hit books, neither were obvious book to film adaptations).

After the screening of “Wrong Is Right” Brooks showed up and took questions. He reiterated his preference for writing the dialogue the night before shooting to keep the actors fresh (could Connery have put up with this madness?) and talked at length about the amount of research he’d done at think tanks before launching into writing his screenplay. I remember this because it left an indelible impression on me–the fact that the writing of a screenplay was so sacrosanct an act to him as to require real research made me realize how truly important the work could be.

And then some USC student raised his hand and asked for his advice on how to break into the business. Apparently this kid had already been out and about Hollywood and hadn’t been pleased with the reception he’d been accorded. Brooks stared at him as the kid recited his litany of woes. He’d been all over looking for a job–any job–on a movie and nobody would hire him. He even bought his own Nagra tape recorder but couldn’t get into the sound union. He’d written a screenplay but couldn’t get anyone to read it. “Mr. Brooks, if you were me, would you keep trying or give up?”

Brooks peered at the kid, his navy style crew cut giving him a drill sergeants demeanor, the pipe clenched in his mouth adding a professorial touch. The pause after the kids speech and before Brooks answer was akin to the pause in “Patton” after George C. Scott hears from the traumatized soldier that he has a bad case of “nerves”.

Brooks started gently. “You couldn’t get a job, huh? And the sound people don’t want you? Hm. And you wrote a script–a whole script, start to finish–and you can’t get a read. Is that right?” The kid nodded. Big pause. And then, as if chipping each word off a rock, Brooks said: “Kid…let me give you the best piece of advice anyone will ever give you: if you want to make it in this business…you have got to be prepared to EAT SHIT UNSALTED!“

The applause was as much for the sentiment as well as the old storytellers theatricality. Later, leaving the screening, I noted that Brooks had a limo waiting for him to take him back to wherever he was living. So maybe he really was “old Hollywood” –or at least was tied to the vestiges of that vanished world which had made him–after all.

Here’s part two of the interview with Brooks from 1985.

AT HOME WITH W.C. FIELDS

W.C.FIELDS JUGGLES HIS ASS OFF