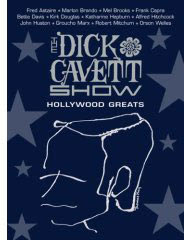 Behold, below, two clips from one of the most extraordinary gatherings of filmmakers ever assembled on one prime-time talk show–scratch that, assembled anywhere. On a 1971 Dick Cavett show (when he was still on network), Cavett had Peter Bogdanovich, Robert Altman and Mel Brooks–all representing “young Hollywood” (though Brooks and Altman were each about fifty years old by then)–welcome the legendary Frank Capra, then seventy-five years old and promoting his newly published autobiography “The Name Above The Title”. (Personal note: Capra, his films and his book are what influenced me to want to make my own films–his book still has a vibrant and tremendously appealing “call to arms” quality about the power and responsibility that being a filmmaker carries that makes it damn hard to read and not want to join Capra’s “one man-one film” army.)

In the first clip, Capra comes on and talks about “It Happened One Night”, “Dirigible” (an early pre “Capra-Corn” aviation/adventure flick) and “Lost Horizon”. In part two, Cavett asks the group if “Hollywood” is dying; Capra’s no-nonsense response and unapologetic assertion that filmmaking is the greatest of all story-telling mediums and CAN NEVER DIE evokes in me the same spirit of pride and righteousness that his book did.

But there is much else to enjoy in the below two clips: Bogdanovich’s marvelous tirade against the odious critic John Simon; Cavett and Mel Brooks’ “duet” reading of the commercial; the fact that everyone is smoking cigarettes on air; and Altman’s peculiar reticence–he barely speaks up and seems decidedly ill at ease, while Brooks and Bogdanovich are clearly in their element; and Capra, as previously mentioned, is stirring, articulate and unapologetically optimisitic about the medium he devoted his life too. I knew Altman a little and got the distinct impression that he was most comfortable being the center of attention and distinctly uncomfortable being a part of any sort of group; Brooks I don’t know at all but, given the multitude of personal appearences of his that I’ve seen, this appearence strikes me as less emphatic than most–he’s not doing “crazy Mel” and is clearly making an effort to come off as “charming” and more than a little humble. Indeed, he makes a joking reference to his being called “a director” because he’s only made two movies (“Blazing Saddles” and the big hits were still a few years away). Peter Bogdanovich, I’m honored to say, is a good friend and I find him as delightful and honest here as he remains in person, thirty years hence. One of these days I’ll have to ask him for the behind-the-scenes story of this gathering of titans.

Why the hell aren’t Dick Cavett’s shows being re-broadcast, re-mastered, re-cycled on DVD, etc.? If there was a “Cavett Channel” I would gladly pay a premium for it. Not only was his ABC show a wonderful place to see truly in-depth interviews with some astonishing people (TCM has been playing a few of the ones featuring movie stars–Hepburn and Mitchum to name the ones that I’ve caught) but his later PBS show–which was a half-hour one-on-one format–was one of the singular television experiences of my youth; I recall seeing Olivier, Wells and John Cheever, to name just a few, talk in depth with Cavett who always–for my money–seemed to be both charming enough to relax the giants who he lured but also canny enough to know the right questions to ask them. If he was sometimes a bit fawning or goofy, he was still a major cut above James Lipton…and also represented something that it feels to me is disappearing: the art of being a fan. Cavett is/was an unabashed appreciator. In fact, I invented a word for this: enthusiator–a person whose station in life is to celebrate the talents of others. Am I being fogey-ish in thinking that in our current culture of perpetual “high-school” popularity contests, the art of the enthusiator is an endangered one?

AT HOME WITH W.C. FIELDS

W.C.FIELDS JUGGLES HIS ASS OFF