CITY ISLAND: THE ALAN ARKIN OF IT ALL

The great actor, writer, director, comedian, folk-singer and children’s book writer Alan Arkin is–I’m proud to say–a member of the “City Island” cast, playing a slightly worn out acting teacher named Michael Malakov. Though he appears in only a handful of scenes, Malakov is an important character as he is the acutalization of what Vince (Andy Garcia) aspires to be. You see, Vince secretly desires a career as an actor–but in his world (he’s a corrections officer) admitting this is akin to admitting that he’s always wanted to be a cross dresser. Malakov is a deeply serious man whose acting class shows Vince that the craft is a SERIOUS one and must be taken SERIOUSLY. But that doesn’t mean that the scenes with Malakov are SERIOUS ones–in fact, once Alan came onto the project the scenes got a lot funnier. I had a talk with him about what happens to people who teach acting for many years and Alan’s response–that they become frustrated with the ponderousness of what they’re seeing up on stage–led me to suggest that he rewrite the scene so as to reflect his own feelings. Alan’s rewrite produced a speech about…well, I won’t give it away. I will say it’s one of the great rants on the subject of acting I’ve ever read. And the bonus thing is, I’ll get credit for it! (Robert Altman taught me this–let all the talented people you hire contribute their ideas, since you’ll get the credit in the end anyway…Altman was a provocateur and always had a gleam in his eye, but I have a feeling that his tongue was only slightly planted in cheek when he passed on this bit of wisdom to me…)

Did you know that Alan Arkin was a member of a band called The Tarriers who co-wrote and performed the “Banana Boat” song that Harry Belefonte later made famous? That he is one of only eight actors to have the distinction of being nominated for an Academy Award for his first screen appearance? That he played Sigmund Freud (in the lovely 1976 “The Seven Per Cent Solution”)? That he’s been married three times? That he lives in New Mexico? Want more? Click here and Wikipedia will fill you in on the multifarious accomplishments of this remarkable man who truly is a walking cultural monument.

There are so many degrees–much more than six–to Alan and this movie. There’s the Inspector Cloeseau one that I mentioned the other day (he was in the non-Sellers one and Andy Garcia and Emily Mortimer were in the new non-Sellers ones). Then there’s Alan and Andy together in the quite amusing and little seen movie “Steal Big Steal Little” (a very funny Andy performance). Alan co-starred with Peter Falk in the brilliant 1979 comedy “The In-Laws”–twenty-five years later I directed Peter Falk in “The Thing About My Folks”. (We had a funny talk about “The In-Laws” one day on the set–Peter told me that he “didn’t know it was a comedy” until half way through it. What the hell could he have meant by this strange comment? Peter, I think, isn’t above completely putting people on to keep himself from being bored. Which begs the questions:was I boring him?) And Alan’s son, Tony Arkin (damn good actor) is in my film “Two Family House”. Finally, Arkin appears in one of the sixties great social comedies, “Popi”–playing a poor Puerto Rican man in New York City, a widower with two sons, who notices that Cubans who escape their country and wash up on American shores are hailed as heroes and welcomed to America with open arms. So he decides to set his kids afloat in the sea in the hopes that they will be discovered as refugees and be taken up as “a cause”–which will lead them to a better life than they could have alone, in Harlem, with their “Popi”. (The tag line on the poster was: “Better To Drown In The Ocean Than The Sewer”). 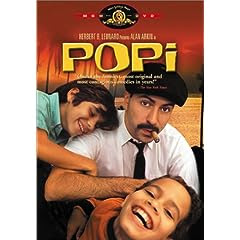 Just recounting this plotline brings a tear to my eye–party because of the brilliance of the comic and emotional conceit of the story…but also because the movie was written by a husband and wife writing team–Lester and Tina Pine–who I grew up with (they were dear friends of my parents) and who were a terribly important part of my young life. Lester, a commited socialist, used comedy to tell stories of the poor and oppressed and shine a light on the absurdity of the lives of the “have-nots” in the land (America that is) of the “haves”. He was an angry, funny, dear man who loved the craft of writing more than anything and taught me great respect for the process of mastering dramatic form…and the need to say something with the medium. When Alan and I first spoke about his appearing in “City Island” I mentioned this connection and he was quite moved; he and Lester went back to the 1950’s when Lester was a stand-up and I imagine part of their past had to do with the fact that Lester and Alan’s father, David Arkin (a set designer) had both suffered the blacklist for their association with the Communist Party.

Below is a quite interesting interview with Alan done around the time of the “Little Miss Sunshine” buzz, as well as a clip–the airplane scene–from “The In Laws”.

(This has been a Raymond De Felitta early morning “I’m supposed to be on my way to my own set what the hell am I doing blogging” post).

ALLAN SHERMAN &TOO MUCH INFO ON ‘CRAZY DOWNTOWN’